Cadbury Chocolate began in Birmingham, West Midlands, UK, where a man called John Cadbury (1801-1889) opened a shop selling tea, coffee, and his own homemade drinking chocolate (cocoa). He chose these products as they were considered a healthy alternative to alcohol.

This was way back in 1824 when chocolate was considered to be a luxury and available to the wealthy only. John made this delightful treat available to all with some great marketing and an affordable product.

By the 1840s, John had moved his company into manufacturing cocoa and drinking chocolate. Partnering with his brother, Benjamin, the Cadbury Brothers of Birmingham became more and more successful. When the government lowered import taxes on cocoa in the 1850s, chocolate became truly affordable for the masses.

This thriving business even made chocolate for Queen Victoria. Then, as happens with many companies, they fell on hard times. John's wife died in 1855 and he fell ill. Cadbury Chocolate suffered and Benjamin and John dissolved their partnership in 1860. After John retired in 1861, his sons, Richard and George, continued to struggle with the business.

The turning point came with new processes and a new product by the name of cocoa essence. Business improved so much that the Cadbury brothers moved into a larger factory. This new location was near railroads, highways, and canals and, therefore, perfect to receive shipments more efficiently.

In 1881 they received their first overseas order from Australia. Cadbury Chocolate continued to prosper. As the Swiss and French chocolate companies introduced milk chocolate, Cadbury followed suit and eventually surpassed its competitors in both taste and quality.

After Richard's death, the sons of the two brothers joined the firm still headed by George Cadbury continuing in the truest sense of a family business.

New products continued to come from this growing company and by the 1900s the factory employed about 2,500 workers. George provided his workers with housing, medical facilities, pensions, education and training. A happy and healthy work force with benefits like these was an idea of the future. George treated his employees like family and was quick to honor them for their accomplishments and service.

The 1918 merger with J S Fry and Sons added more products to the company's repertoire such as Fry's Chocolate Cream and Fry's Turkish Delight. The brand Roses began in 1938. These additions became fast favorites and established Cadbury as a world chocolate leader. 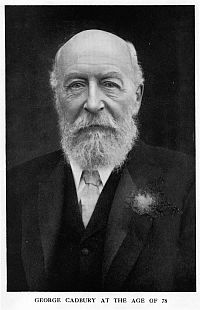 During the second world war, the government took over supervision of the chocolate factory as chocolate was considered an essential food. After the war, Cadbury continued to grow and open new factories and introduce new products.

1969 saw a merger with Schweppes making Cadbury Schweppes a leader in both chocolate and soft drinks worldwide. Cadbury World in Birmingham has a museum dedicated to the history of chocolate. Guided tours of the local factory are also a favorite not to mention a visit to the factory shop for sweet treats.

On February 2, 2010, Cadbury was bought by Kraft Foods which continues to market the familiar Cadbury products under their original labels. Congratulations to Kraft Foods and kudos to the Cadbury family for building an empire dedicated to our favorite sweet … chocolate. And thanks to birminghamuk.com for the details found above.

Copyright 2009-2016 www.The-Chocolate-Center.com your home for everything Chocolate